Spain is the largest producer of olives and olive oil. It has 260 types of olive plants and this variety is represented by 3.000.000 olive trees.  It feels like we saw all of them on our train trip to Granada. 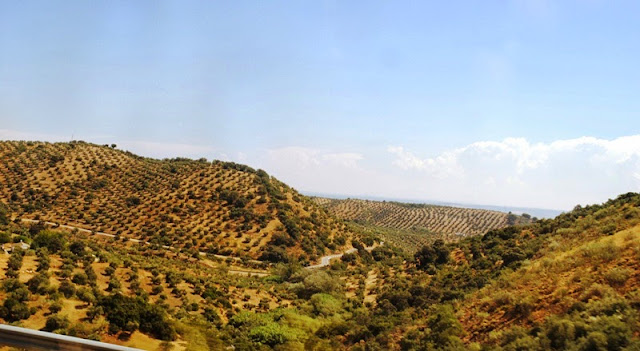 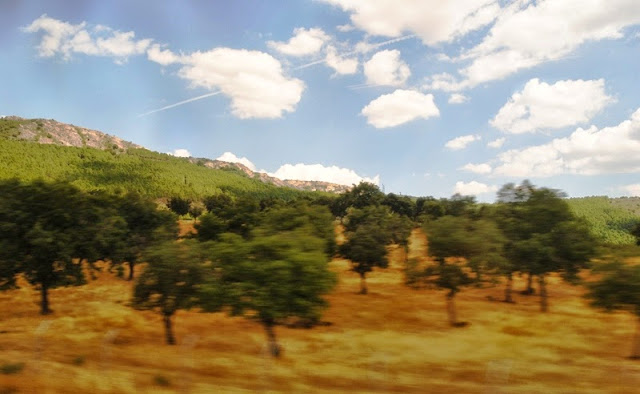 Our hotel in Granada was located on a lively central street with fancy stores and restaurants. To protect the tourists and keep them shopping under the hot Spanish sun the street was furnished with umbrellas stretched between the building’s roofs. 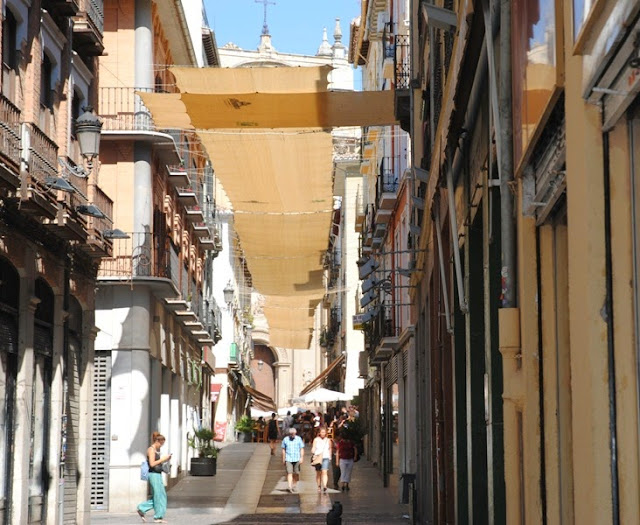 Granada is a charming town with a must see gothic cathedral, renaissance buildings, stunning baroque  facades and orange trees 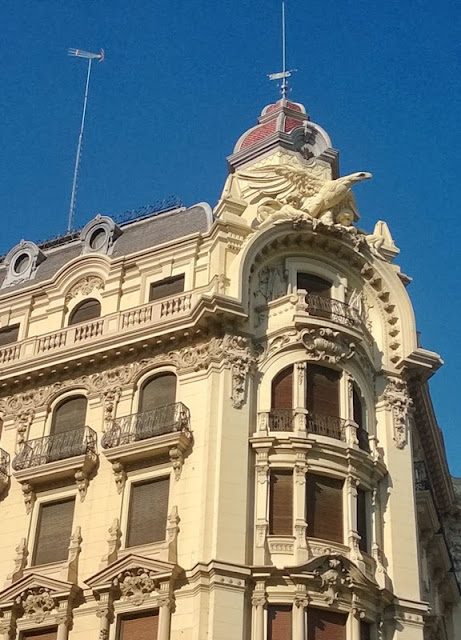 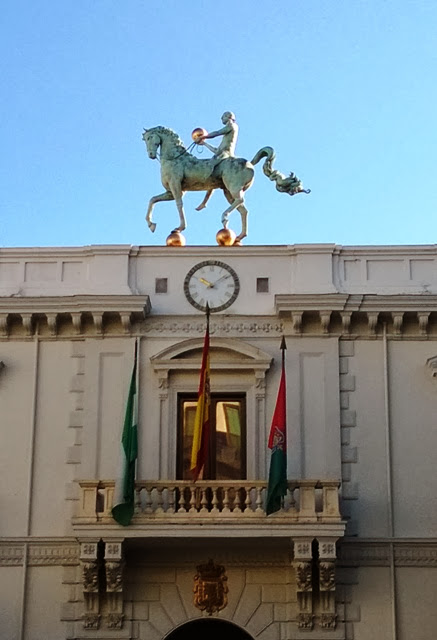 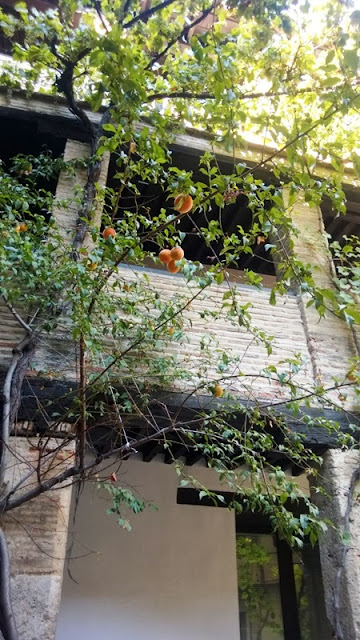 lovely bars and a “Bronx Speakeasy”
establishment on ....
Jesus and Maria street. 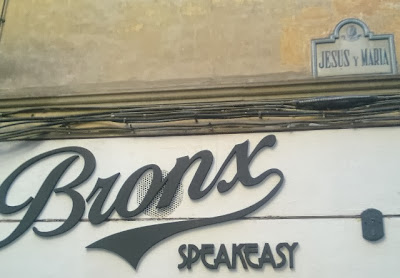 Most streets are covered by layered stones in variety of patterns. 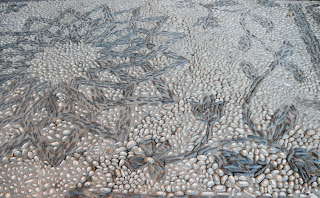 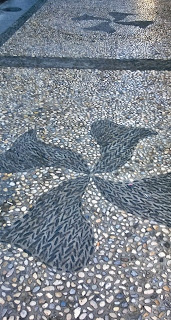 The old Moorish district, known as Alabayzin, is located on the hill across from Alhambra. The district windy streets are full of little shops and bars. 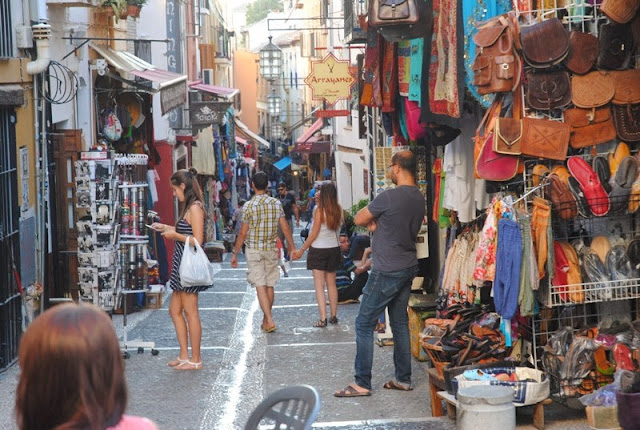 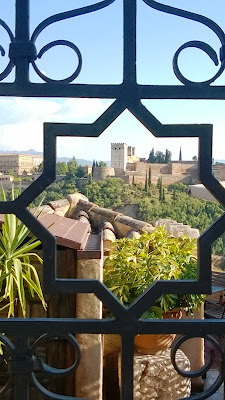 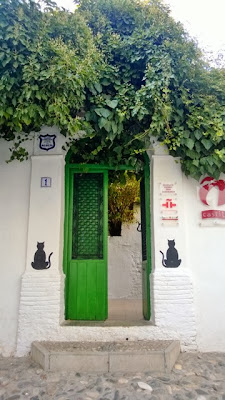 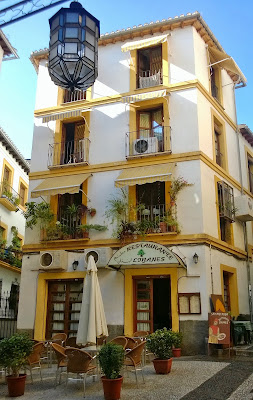 Lebanese restaurant on the little plaza in complete harmony with Middle Eastern feel of the neighborhood. 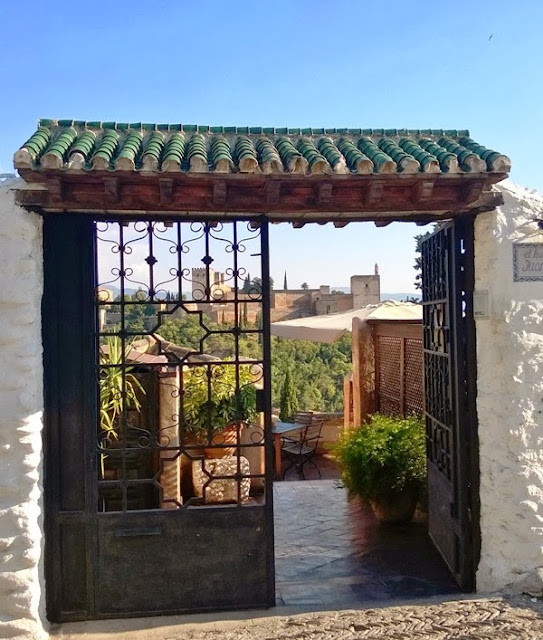 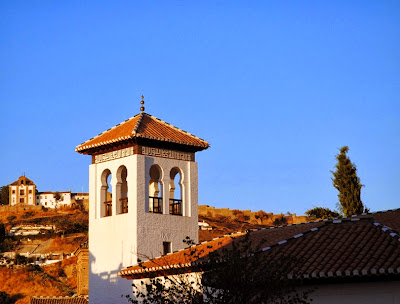 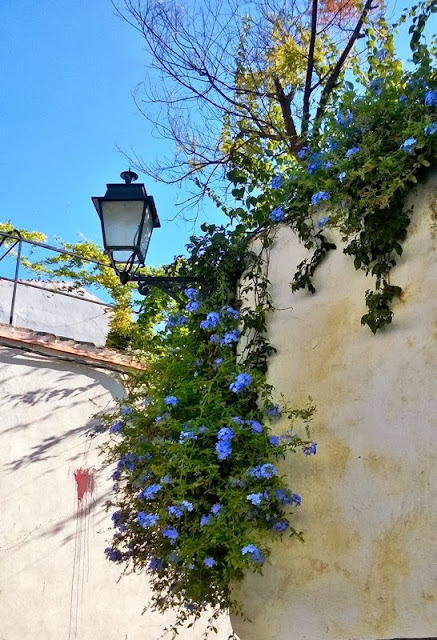 Talking about Spanish flavor, in the “Castaneda” restaurant, I had the VERY BEST pulpo a la gallega (octopus with boiled potatoes) 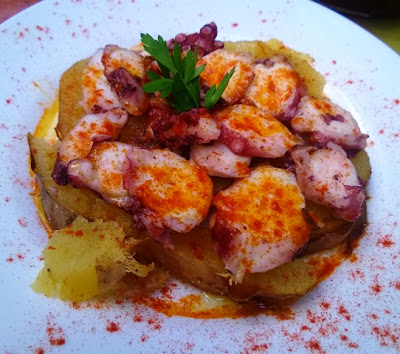 On the top of the Alabayzin hill is the plaza Mirador De S.Nicolas with the most stunning view on Sierra Nevada and Alhambra. No pictures can reflect the grandeur of the view, but people keep trying, 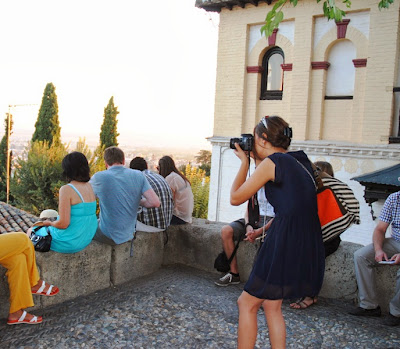 and so am I 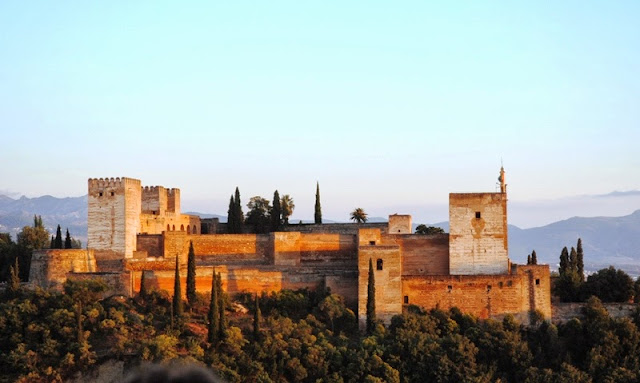 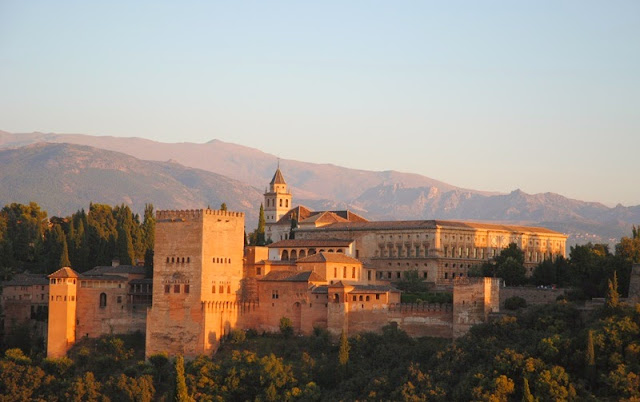 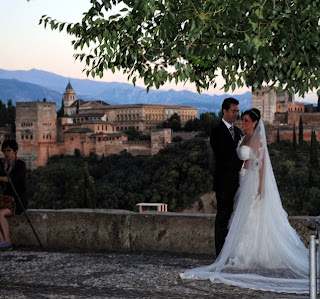 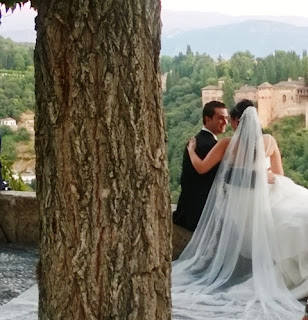 We bought tickets for a guided tour of Alhambra weeks in advance. A bus was suppose to pick us up near our hotel at 9:30. As naïve Americans we started to get nervous when there was no bus at 9:35 or even at 9:45. The Mediterranean time rules were in action. When we finally arrived at the gates of Alhambra  the place was very crowded with tourists, buses and guides. Tourists were sorted like cattle in groups by language, counted multiple times in multiple languages and passed to the tour guides. Not the best start. But the initial unpleasant experience was quickly undone by the majestic beauty of the place and important events which took place there. 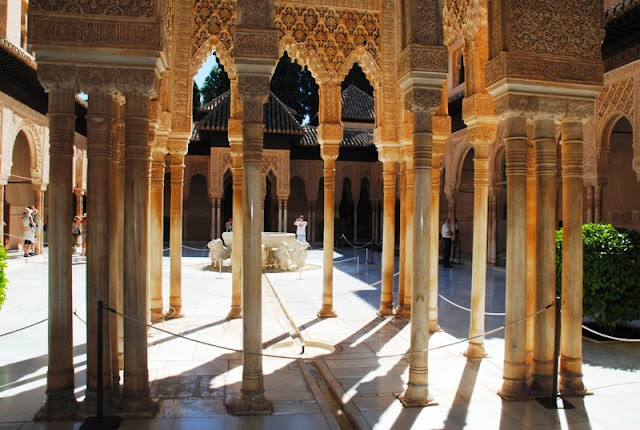 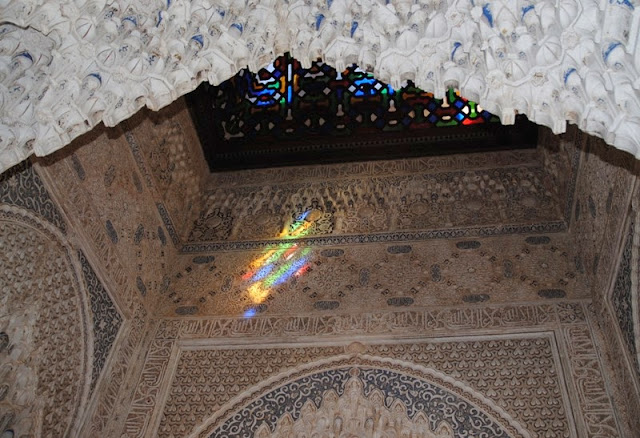 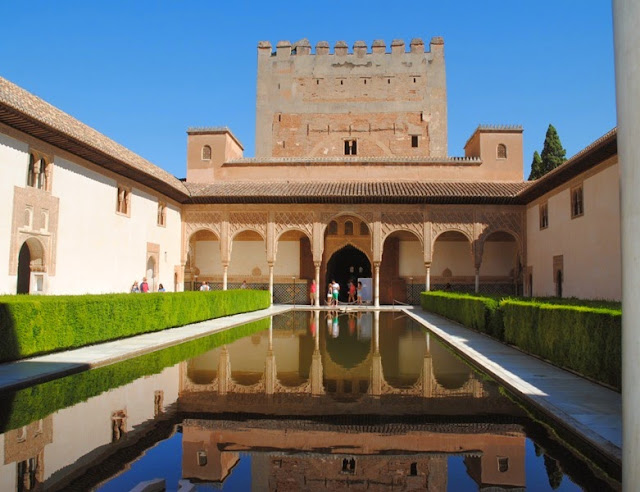 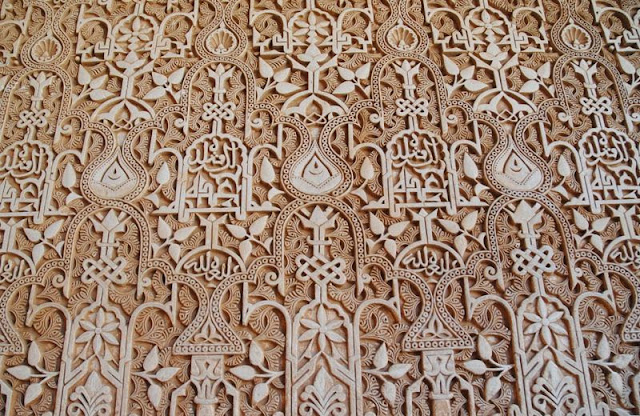 The splendor beauty, the antiquity, the obvious literary associations of Alhambra reminded me of Venice. People don’t live there anymore, and the place is so romantic and unreal that I felt like a minor character in a fairy tale (in this case in Arabian night). 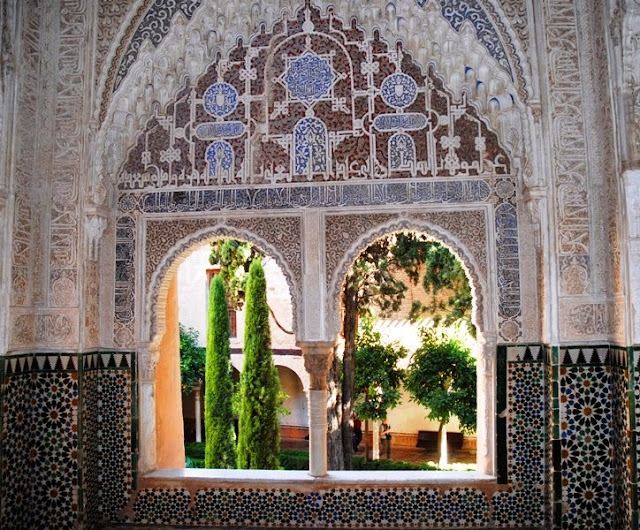 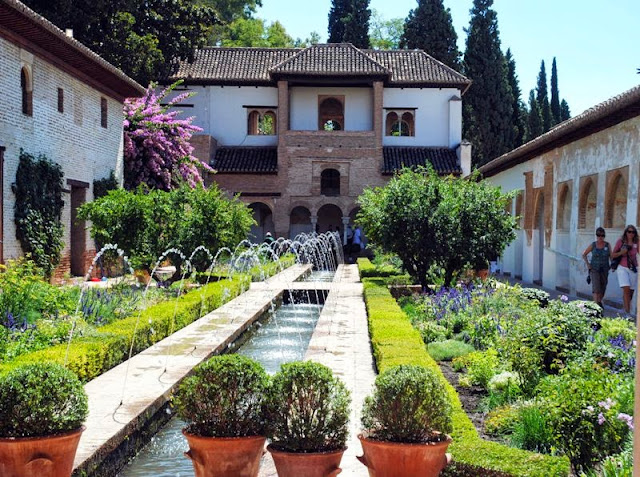 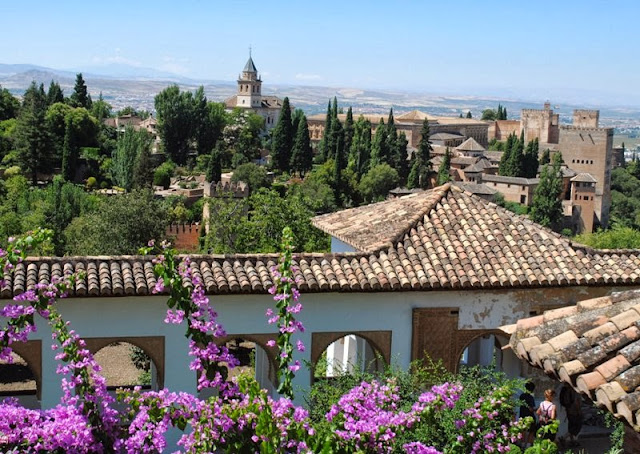 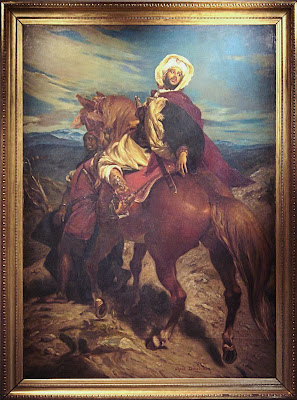 The Alhambra was built by Nasrid dynasty and was the home of 22 sultans. The last sultan of Granada surrendered Alhambra to Ferdinand and Isabella in 1492. Legend has it that as the royal party moved south toward exile, they reached a rocky prominence which gave a last view of the city. Looking back at Alhambra and beautiful valley for the last time he burst into tears. When his mother approached him she said: "Thou dost weep like a woman for what thou couldst not defend as a man." Kind and supportive mother, she was not…
Posted by Stellochka at 11:56 PM