A very long flight. The transfer flight to the Bilbao in the Charles De Gaulle (CDG) airport was in a remote terminal reserved for small local flights. We spent a joyful four hours there without Wi-fi, after our 7 hour overseas flight from DC.  On arrival to Bilbao, the last leg of our trip was an hour long bus ride to San Sebastian. After an exhausting trip we are finally arrived in our small tourist apartment. The apartment is somewhat remote from the San Sebastian downtown and located half way up the side of a serious mountain. 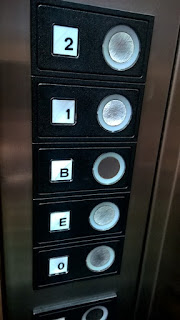 Although the apartment was listed as a first floor, it was really on the fourth floor. The Spanish way of floor counting includes a few letters before the counting starts

The mountain and the fourth floor contributed to a beautiful view 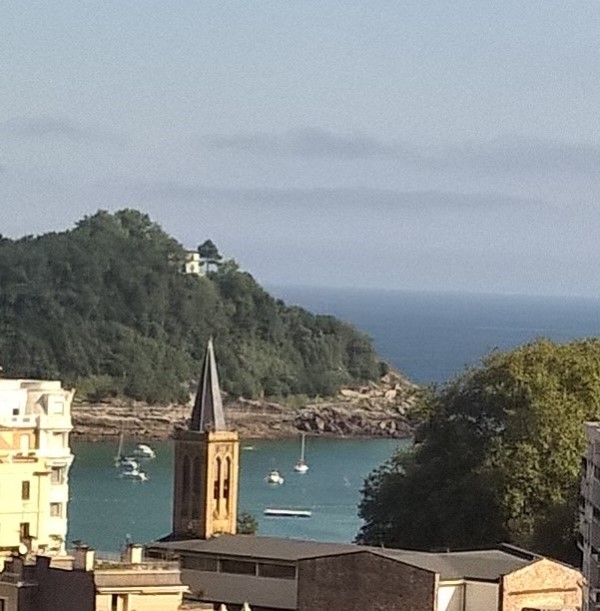 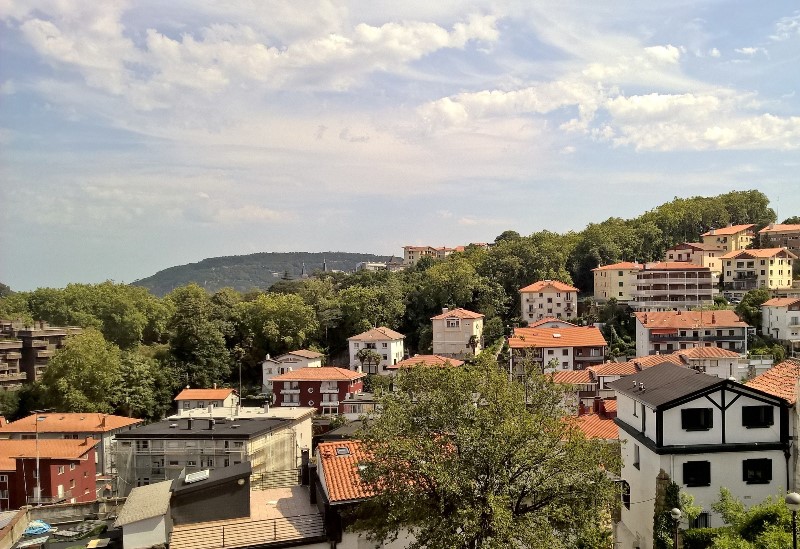 Just a few steps down our street was the restaurant Kultura, where we had our first meal outside of the air travel industrial food complex. It is a delight! We were seated in a small room - an extension of the bar and enjoyed a nice bottle or two of Rioja, fabulous roasted pimentos with pungent olive oil and garlic and a plate of Jarmon.  Life makes sense again! 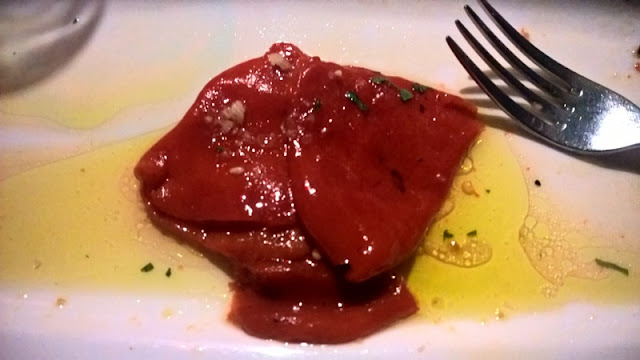 Dining and drinking next to us were a group of middle age people. They appeared to be northern European – large, tall and blond, but speaking a language which we could not identify even as we recognized many French, German, Spanish and Italian words.   We understood so many words, that we knew that they are talking about politics. It drove me crazy with curiosity and I finally got drunk/courageous enough to ask what language they speaking. Basque! Of course; we are in the Basque country.
The next morning we rushed to the beach for the first swim in the La Concha bay. The bay is part of the Atlantic Ocean but so protected by several small islands such that there are no waves. The water is clean, cool, and heavy with ocean salt. The sandy beach slopes so smoothly and gradually, it is difficult to believe it is natural. After the initial shock of cold water, it transitioned to fabuluos bathing/swimming experience. 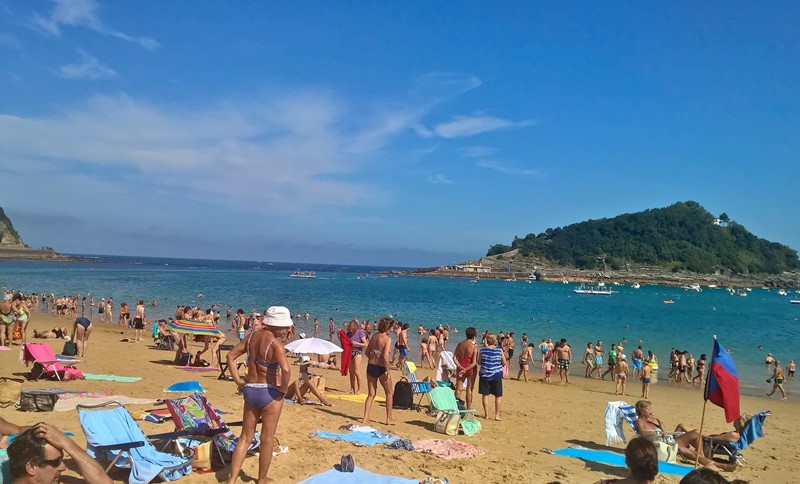 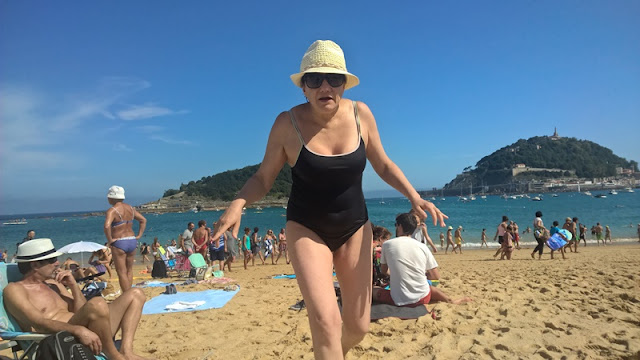 The ocean is so close, that we could hear waves crushing against the shore in the stormy night.
Our balcony with a view begged for an al fresco lunch. The supermarket is located on the next street just a few steps down 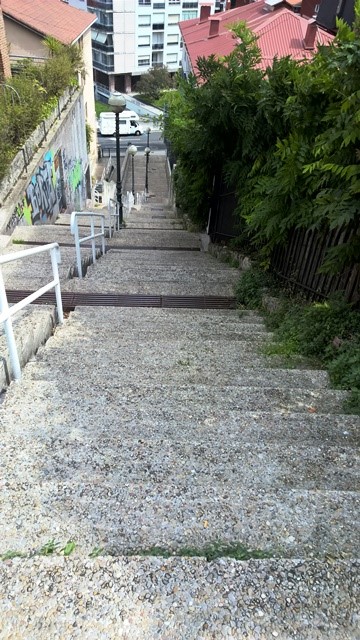 The produce section is very decent with good tomatoes, my favorite green plums (The picture is a painting - courtesy of National Art Gallery) 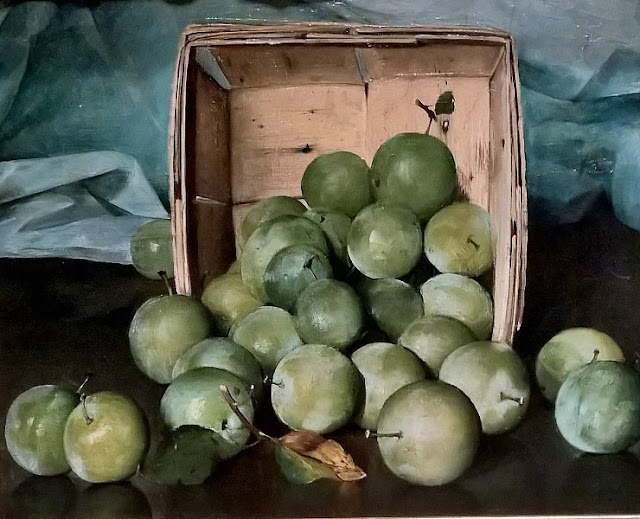 The parsley had such intense flavor, nothing like the mild flavored herb I know from the Whole Foods 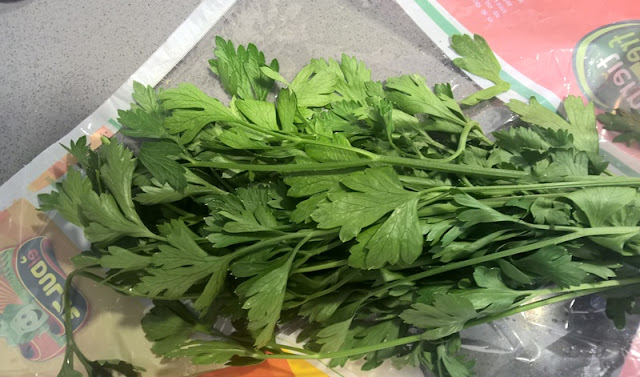 The San Sebastian’s Sunday afternoon sounded like a bizarre orchestra of church bells, soccer fans roars and clinking silverware and glasses of people eating lunch with families on the balconies. Relaxing and carefree joy of living 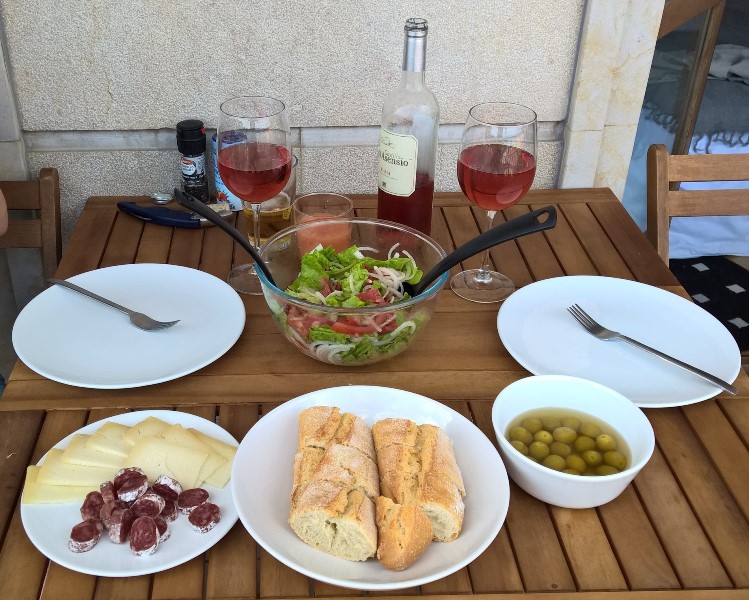 San Sebastian is a perfect resort town: the beach, the view, cool historical downtown with old churches. The downtown is filled with young and beautiful people, eating and drinking in the endless array of cafes and pintxos bars 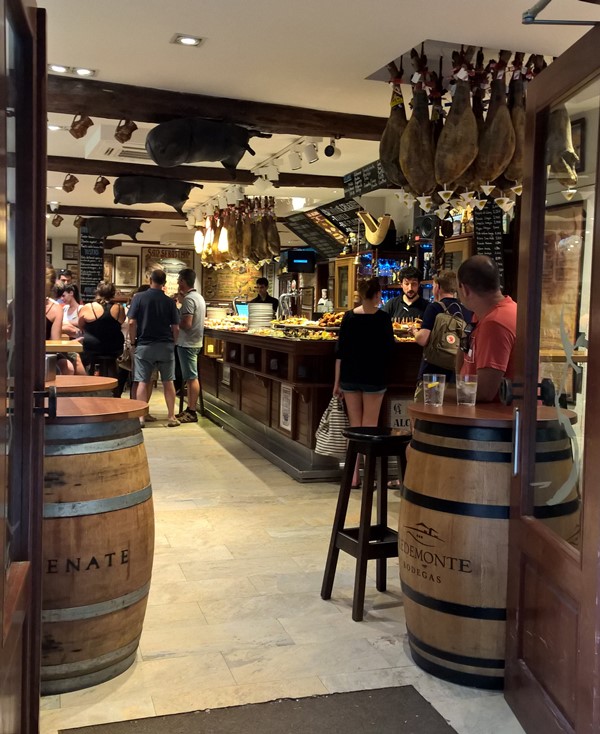 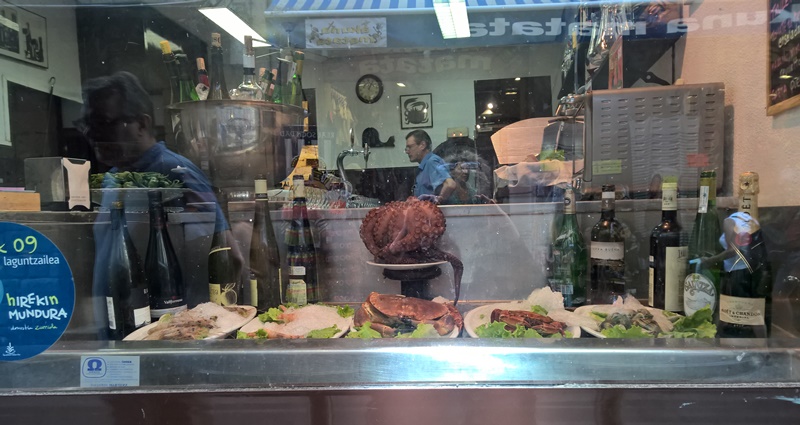 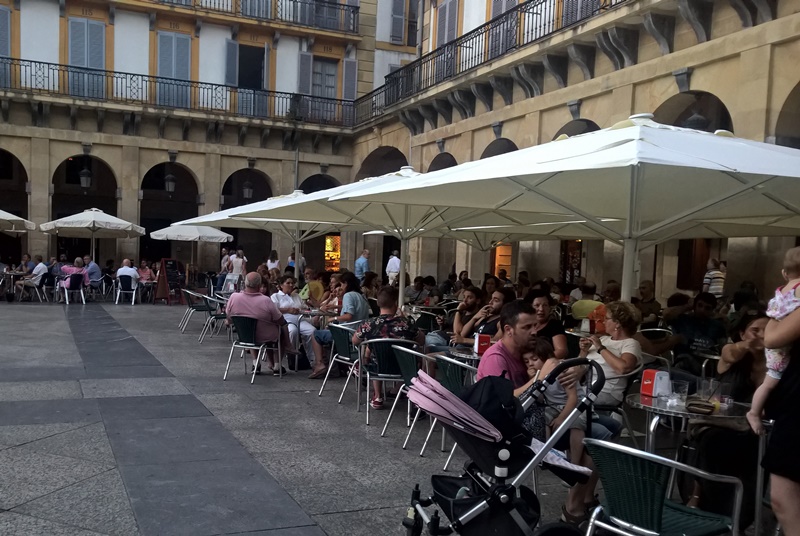 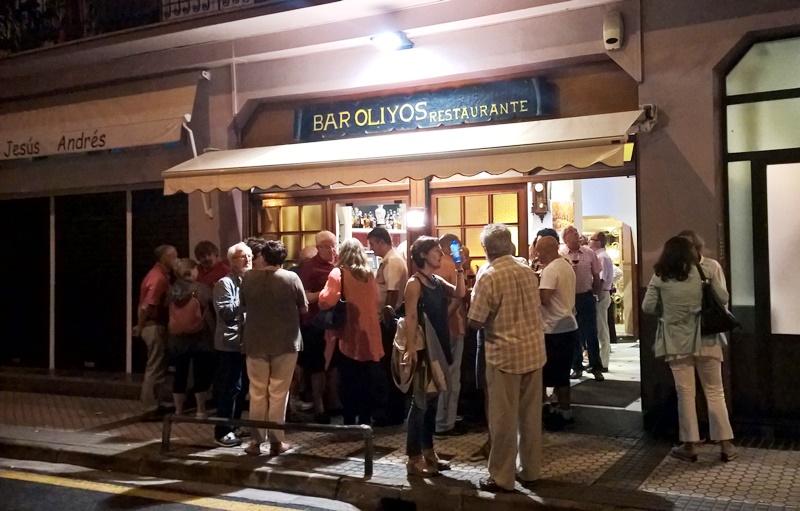 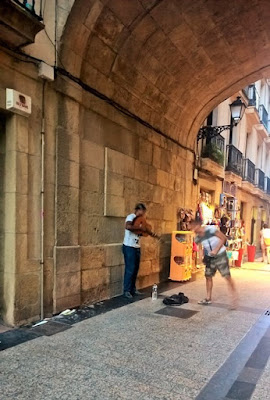 Street musicians are everywhere, this one played Dylon’s Blowing in the wind song in a Bossa Nova style


The non-disputable winner of the small bar-restaurant experience we discovered right after visiting San Telmo museum of Basque society.
At first a few words about San Telmo. The museum building integrates the modern structure with old Dominican convent from the 16th century. We went there to learn about Basque history, but could not find a coherent exhibit about the subject. The temporary exhibit is about great Italian filmmaker Pasolini. The permanent exhibit had nice painting collection including my favorite Spanish impressionist Joaquin Sorolla and several excellent works by El Greco. The audio guide had only few second on El Greco mostly explaining that he was mannerist.
For more authentic local experience there was a nice collection of giant dolls "erraldoi eta buruhandiak", in Basque language, from the traditional festival on the show in cloisters 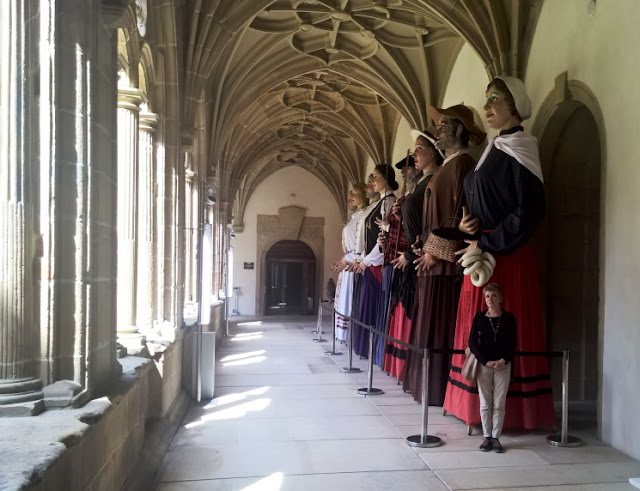 I felt we missed something important in this museum, but the feeling was quickly gone as we left the museum and found the marvelous little restaurant in a narrow dark alley right outside of museum. 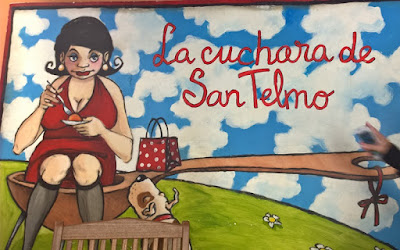 We were seated outside at the communal table next to a friendly family which was clearly enjoying their meal. They said that they are regular in SS and in this restaurant; they also told that the restaurant has the BEST foie gras ever and we are FRENCH! We had no choice but to follow their recommendation. The foie gras was served with mustard, honey and orange peel and it was out of this world experience 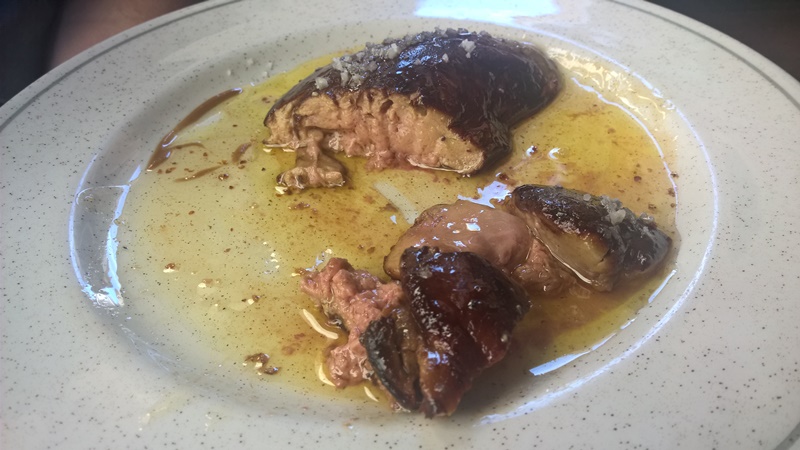 The main street curves around the bay along the Concha beach. It full of people, restaurants, and at night occasional free concerts on a grassy hill right of the beach 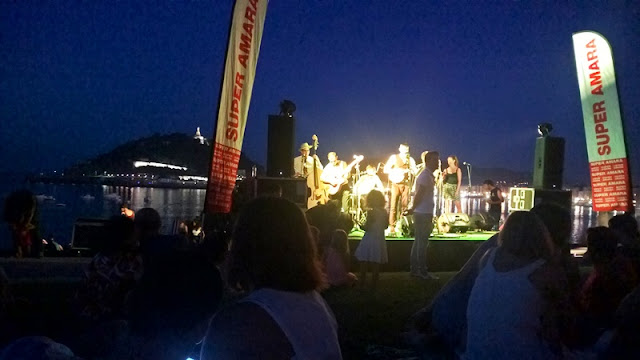 We walked along Passeo de la Concha many times; the bay was always different and always beautiful 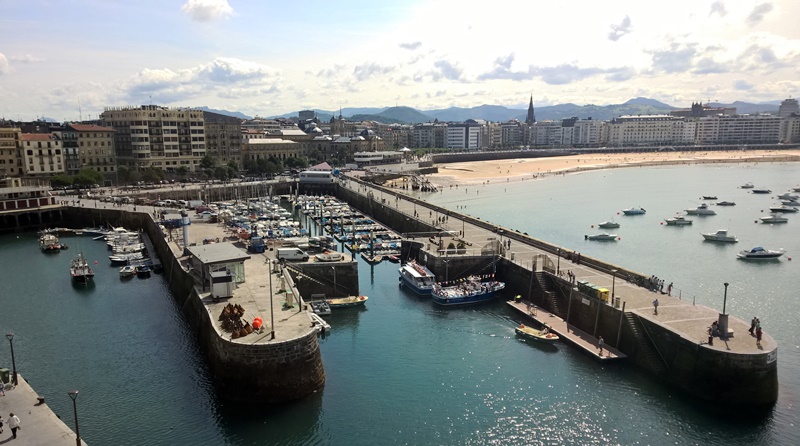 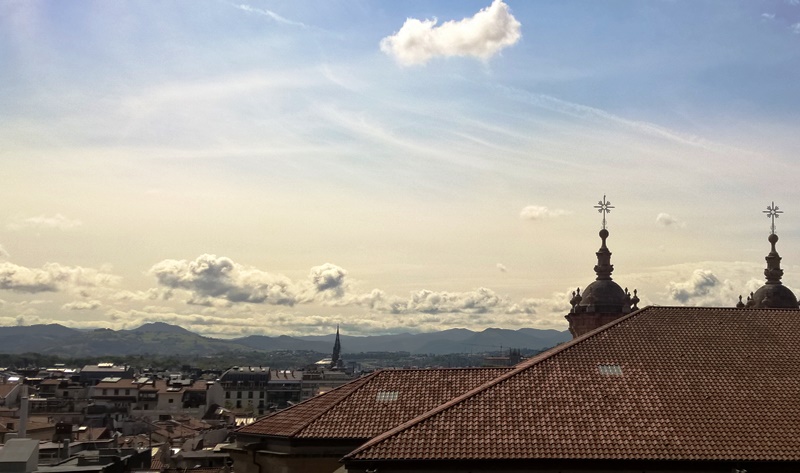 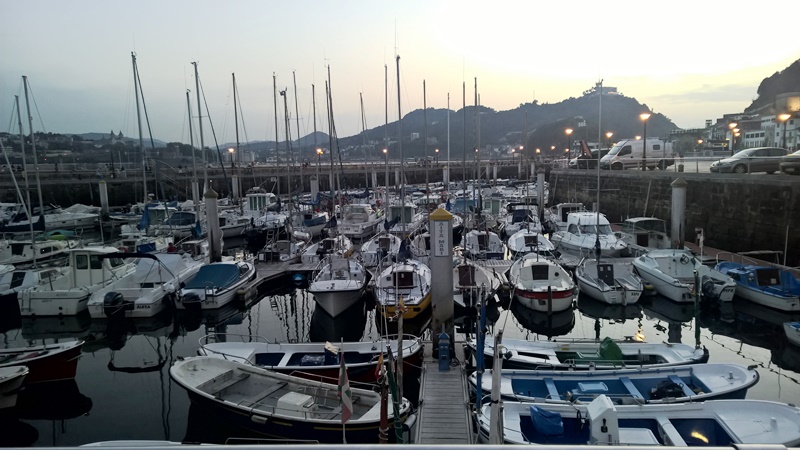 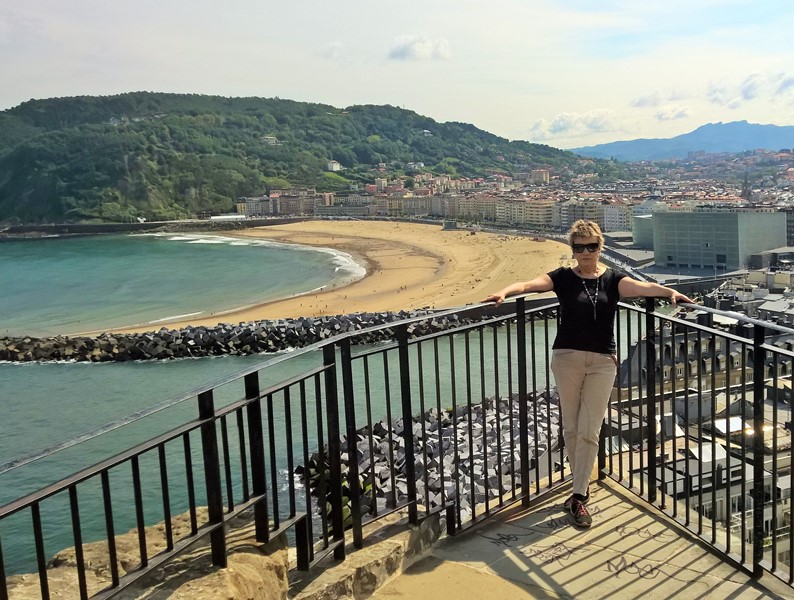