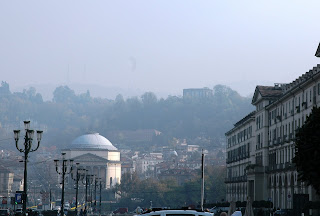 Piazza Vittorio Venneto is located on the west bank of the river Po. From there one can see Gran Madre de Dio church and a huge hill behind it. Since we lived near by we decided to cross the river and go up the hill. Several times during our travels in Italy going up hill proved to be a memorable experience. I only want to mention Sanctuary San Luca on Guardia Hill near Bologna which is 287 meters up the level of Po and has the endless staircase covered with porticos which was enough to explain why with all the extraordinary rich food (lardo is a fat of choice) locals there don’t show any signs of weight problems. 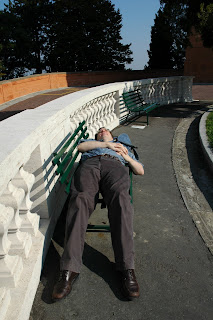 Patrick after he conquered Guardia Hill in Bologna

The Turin across the river is an innocent wealthy enclave, where Armani boutique for babies looks normal. 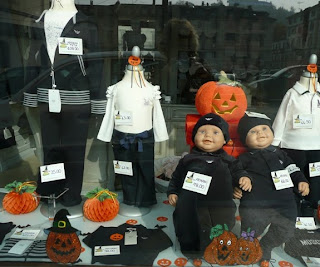 Of course how one can survive without baby Armani apparel!

Here half way up the hill is a gorgeous villa della Regina which was destroyed in bombing of 1942 and now almost rebuild, but still not open for visitors. 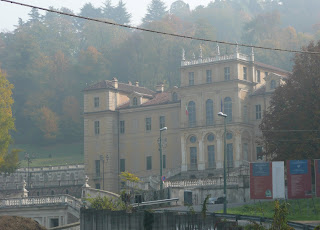 But the road still going up and so we are determined to conquer another Italian peak.
The efforts were fully rewarded when we’ve got to the top of the hill and found a romantic and serene park Villa Parco Genero completely furnished in fall attire. 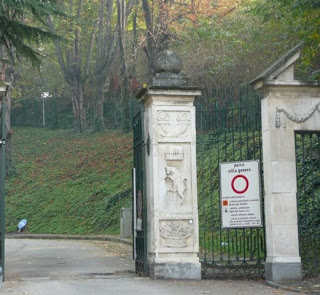 Along the alleys of the park benches are set, where in clear day visitors can enjoy the view of the city and the Alps on the other side of Turin.Since it was a foggy fall day and I could not take a picture of Alps, I asked Patrick to take pictures of me in the park: 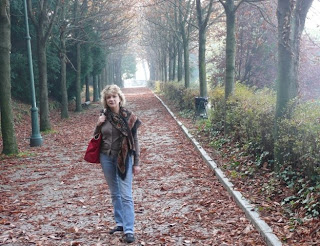 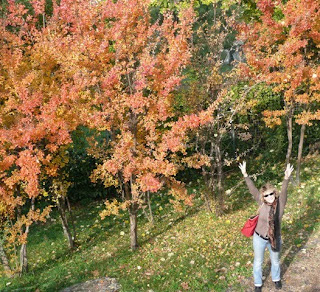 The park has strange half ruined sculptures: 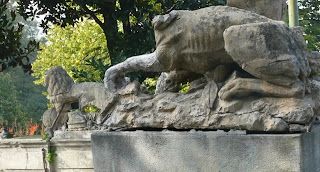 Jews were hiding there during the war. 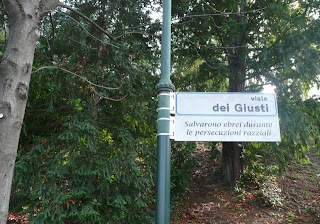 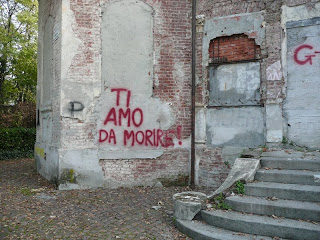 As it happens often the most interesting sites are not mentioned in travel books…
Posted by Stellochka at 1:01 AM