The flight from Paris to Italy is always anticipated because of the view of the Alps from the plane. This time the view was surreal. The solid cloud coverage from the north looked like the sea hitting the rocks on the shore. The clouds stopped at the mountains picks. On the other side of the Alps the sky was bright and clear. Italy!

The hotel had no special charm. But view from the little balcony on the Po river brightens the boring interior of the business hotel. 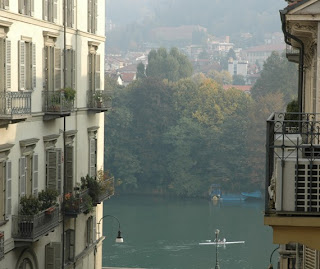 If you add to that a location, just off beautiful Piazza Vittorio Venneto surrounded by porticos with all the bars, restaurants and shops the hotel was completely OK. An addition they provided a nice complementary breakfast with cheeses and smoked sausages, fruits and cappuccinos. The savory breakfast as Vera likes to describe it. And than there were bathroom slippers which were so soft that putting them on after day of walking for 8-10 hours was such a delight that I took them with me to Barcelona.
Here is piazza Venneto from the other bank of the Po and a curious bit of the history of construction: 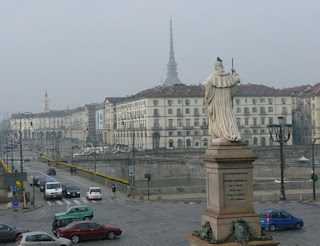 After 1817, Vittorio Emannuele I decided to extend the city towards the river creating a square at the end of Via Po. The vast area to be leveled and the huge cost delayed the project. In 1825 G. Frizzi design featuring continuous arcades was accepted by the King and businessmen funding the project. The 7 meters difference in level between the entrance to the square and the bridge were cleverly masked by gradually altering the heights of the pavements and cornices along the facades.

Bars in Turin have all night happy hour. When you buy a drink you can pick up a plate of lively hors d'oeuvres from the selection set right at the bar as complementary snack. The most traditional include grilled red peppers cover with olive oil and anchovies, various little pizzas and foccachios, little sausages and cheeses. Bars get really creative with them to lure more customers.
After a few evenings I open for myself a drink which they call Americana and which consists of Campari, Martini Rosso, club soda and a piece of orange. I’m in love again!
A lot of young people were doing this instead of diner, but Patrick of course was not fooled and requested full diner after a drink and a snack.
Posted by Stellochka at 7:34 AM